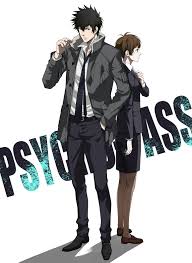 Psycho Pass is set in the time of 2113. Of course, since this is placed in the future we’re obviously going to see a lot of futuristic things which for in my case I was extremely jealous of. The main character, Akane, who is a new inspector for the Public Safety Bureau Criminal investigation shows off a lot of her gadgets in the first couple of episodes.

I wish I had a computer butler who could change the entire interior of my house to anything I wished or change my clothes with a touch of a button anywhere I went. The utter convenience you see in this show is staggering.

Anyway, this show starts out with Akane on her first job as an inspector. My first impression of her was that she had a very mellow look to her and that she didn’t look like she belong doing police work. Turns out, I was right but I will not tell why or how I knew that I was right. You need to watch it to figure it out.

As an inspector her job was pretty much simple. To make sure the Enforcers did their jobs correctly. Enforcers are very disturbed people in which the higher ups use to help them go after criminals. Now this is where things get interesting.

The police in this anime kind of work the same way as they do in present time except with all the awesome gadgets. The other things is that each person is equipped with a special gun that can tell the difference between an innocent civilian and  cold hearted killer. Also, what I found that was really awesome about these guns is that if someone had the insane urge to try to kill an innocent person the gun’s safety would turn on, if not innocent and the person turned violent the gun would transform into what I like to call Lethal mode.

The Enforcers are all unique characters but some reason Kagari, who is one of the Enforcers kind of reminds me Karou from Ouran High School Host Club. He loves to tease and joke around Akane. When they first met he tried to flirt with her, but I think he’s a bit bipolar from how he can just flip the script on you really fast.

This anime show and characters are quite interesting and I recommend that people give it a shot.