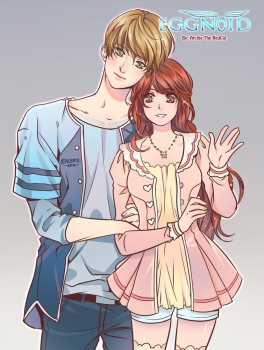 This one is an ongoing series called,“Eggnoid”, that was made by Archie the Redcat. Of course, that’s not the creator’s real name but that’s what they want to be called. But, I still thank you for creating this so I guess I doesn’t matter what you call yourself.

Anyway, Eggnoid is about a teenage girl named Ran who one day wakes up in her bedroom to find a giant mechanical egg in the middle of the room and it opens up to have a handsome man inside of it. She’s named the guy, Eggy, because of how he came into her life. Also, the moment he was hatched, he calls Ran his mom and he doesn’t know anything about himself. So, she decided until he gets his memories back she’ll take care of him.

I think the reason Eggy showed up to her is because she was chosen because right before he hatched a voice said to her that this person will heal her loneliness and he will become a great person for the whole world. That makes sense considering that she has only one friend, Olfie, who is also her next door neighbor. Lately, he’s been acting distant and cold to her after he got his new girlfriend (or that’s what she thought) and now they barely speak to each other unless its required.

In the story, you come to find out why Olfie is doing what he’s doing to Ran. This is another I’m doing the wrong thing for the right reasons type situation. I already knew what he’s doing is going to blow up in his face eventually and when it does, he’s going to have no one to blame but himself. I can’t wait for Eggy to get more intelligent and all, so he can start acting like Ran’s boyfriend because it looks like Olfie and Ran aren’t going to be together anytime soon.

This manga hasn’t gotten too far into the story, so if you don’t like incomplete stories or stories that just started then I wouldn’t suggest this one. But, if it doesn’t matter to you and your into romance and sci-fi type of stories then give this one a shot. Theirs a lot going on in the background of this story than what is said and done between these three and I can’t wait until they reveal the answer to us all.