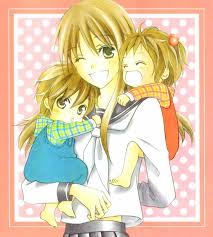 The manga called,” Love So Life” is about a 16 year old girl named Shiharu whose dream was to someday own her own daycare center. Her only problem was that she was an orphan and saved up every penny she earned working part time at a local daycare. Basically, she worked and went to school all the time and didn’t really have a social life unless you count her playing with the kids.

Until one day, a guy named Seiji asks her to work for him to take care of his twins, Akane and Aoi because they seemed to like her a lot and only listen to her. He also offered double the pay which was an added bonus to her and she quickly took the job and I was glad she did. Turns out the twins don’t listen to him, at all. They stay up all night, they keep cluttering up the house with their toys, cry for no reason, get into fights with each other, etc.

Plus Seiji is a popular TV announcer who really cares about his image when it comes to work, but the moment he gets home his body shuts down and he can barely make it to bed before he collapses. Which is really funny to watch in this manga because sometimes he will actually try to stay awake and try to talk to Shiharu, but his sudden mood change just ends up scaring the girl to death.

If you’ve read a lot of manga like I have then what was going to happen in this story was pretty much obvious to me. She was going to fall in love with Seiji, gets too attached to the twins and probably become a happy unofficial family. And what love story wouldn’t be complete without a love rival, so I wasn’t surprised when they put the hot headed, Noa, into the story who secretly had a crush on Shiharu.

The only reason why I kept reading it was because it was so heart warming and that the twins are so adorable and love reading what they would do next.