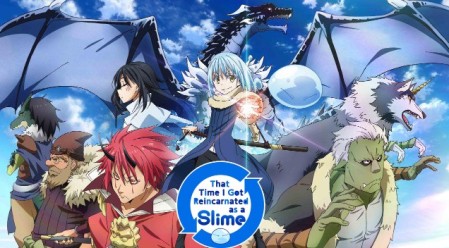 Ah, my first post for the new year, even though it’s almost February……oh well. Sorry that’s its taken me so long to make another post but here it is!

This anime show is called,” That time I got reincarnated as a Slime”, by Fuse. Other than the title; a quick clip of the show on YouTube I found at random had me searching quickly for the full episodes of the anime. The story begins with a normal human man named, Satoru, who is also 37-year-old virgin but loves his normal everyday life. That all changes one day when one get together turns deadly by him getting stabbed and dying.

As he dies a voice which is later called,’ The Great Sage’, talks to him and offers him a new life and asks what he would like. Satoru thinks that he’s going delusional in his final moments so he starts requesting the first things that come to mind without knowing the consequences. Next thing he knows, he’s waking up in a dark cave in a slime’s body and his epic adventure begins.

You can pretty much guess why the Great Sage chose that body for him. Not only was he reincarnated into another world, but it had to find a body that suited all of his requests that he made while dying. He didn’t want to feel pain, hot or cold, have predator instincts (even though that’s not what he meant at the time), etc. So, if you think about it becoming a slime makes a lot of sense. Even though he complains a lot at first about his body, he gets used to it pretty fast.

Then he meets the Storm Dragon Veldora who explains that he’s been sealed in the cave for hundreds of years and if he still sealed for another hundred years or two he will die. What he did to get imprisoned is kind of bad but the way he tells it is funny as hell. Also, Veldora turns out to be a very nice dragon probably because he’s super lonely for being stuck in that cave for so long. Satoru feels bad for him so he makes him a deal, he’ll go out into the world to find a way to unseal him in exchange for being his friend. Veldora agrees and Satoru ends up using one of his skills to eat the dragon and the cage, so Veldora can tag along.

So in short Satoru’s main quest is to release Veldora from his prison before he dies. But, he gets into a lot of funny and serious situations along the way that makes you cry in laughter. Next thing you know Satoru ends up becoming one of the biggest badasses in that world without realizing it. But, there is one thing that still remains a mystery that he’s kind of shrugged off in the show…..who is the Great Sage? Why was he reincarnated into that world in the first place?

According to the anime, people come from different worlds to visit his world sometimes but they are summoned not reincarnated. No only is Satoru’s situation unique and rare but powerful, too. It takes about thirty mages to summon one person to his world, but from what I’ve seen in the show only one big powerful person or entity was strong enough to pull him into that world and make him a new body to boot. So, it begs the questions of why this person or being did that in the first place.

There are a lot of questions to be answered in this anime and if you want to find out the answers I suggest you watch it or read it for yourself. Their are a lot of action, hilarious moments and hot people in this show, so I’m sure you’ll find something that will catch your eye. Hope you enjoy this awesome anime like I did.