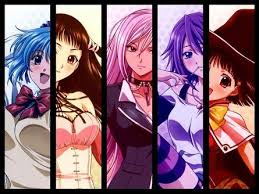 Rosario Vampire is an anime that I think anyone can get into. It’s about a normal human boy named Tsukune who becomes so desperate to pass any schools’ entrance exams that he ends up taking and passing the exam to attend Yokai Academy. Little did he know that he was now going to attend a school for monsters.

For obvious reasons your probably thinking,” Well, why doesn’t he just leave?” The creators of this anime thought about this, too. According to the story, humans can’t even get into the monster world which is where you have to go to even get to the school because its protected by a barrier. This makes you wonder how he is able to even get in there. They also say that if they ever catch a human in the their world then he is to be executed on the spot. Poor Tsukune.

If things weren’t bad enough for him the bus that brought him there only comes once a month. After, his initial freak out moment a silver lining appears and its name is Moka. She’s cute, perky and a vampire! The moment they met she sucked his blood and became hooked, now their the best of friends much to the guys of Yokai Academy’s dismay. She unknowingly became the one of the most beautiful and popular girls in the school and every guy in school becomes totally jealous of Tsukune. In turn gets him in a lot of fights of the school.

During his first with the ogre I thought he was going to die, but I wiped that thought from my mind because their was no way that they would kill the main character in the first episode. During the first episode, Moka’s bad ass personality is revealed. When the rosary that she always wears comes off, her hair turns silver and her entire personality changes into a kick butt vampire.

Later, in the story Tsukune not only builds a reputation among his fellow classmates but also builds himself a bit of a harem of beautiful and powerful girls. Later, we have Kurono, who is a succubus who originally planned to steal away Moka’s popularity, so she can turn all of the guys into her love slaves. But, she ends up falling in love with Tsukune and tries whatever she can to get him to fall for her. Then there is Yukari, who is a genius witch who loves to play tricks on people. The stalker want to be girlfriend,Mizore, is a ice monster that has also fallen for Tsukune and follows him everywhere. Later, in the season another witch named Ruby who I like to think is kind of like Yukari’s big sister in a way since their witches and all.

Last but not least, we have Gin, the Werewolf. He is the only other guy in the group and I think his monster form is totally awesome. Too bad, he’s such a pervert. He’ll do anything to look up a girl’s skirt and he also likes to take photos of girls undressing in the locker rooms. Everyone knows he does it, but he’s so fast and sneaky that he never gets caught.

This anime is filled with romance, monsters, mystery and plenty of monster fighting and I enjoyed every minute of it. I’m hoping that the second season is just as good as the first one.