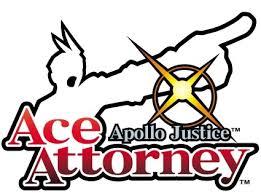 When I first discovered Ace Attorney, fell in love with them. Sadly, it seems I’m not going in order from the first game in the series to the last, but I don’t really care. Even though I don’t know the whole story doesn’t mean I shouldn’t enjoy the game. So, that’s what I’m going to do. Enjoy it.

The Ace Attorney games are like books being turned into a game. You read a lot in this game, so if your not much of a reader then I would steer clear of this one. If you are, then this is a perfect game for you.  In these games, you have to figure out who killed who, who attacked who, why they did it and collect proof. Which is why they call it Ace Attorney because your character is either an attorney or a prosecutor.

This game really makes you think. Sometimes, when I got stuck and didn’t know the answer to a certain kind of question I would just click on every piece of evidence that I had until I got the right answer. Be warned, this game has a health bar, so if you get a number of answers wrong then not only do you lose but you also have to start from the beginning. It sucks I know, but if you do what I like to do which is save the game before you lose and just go back to the point where you last saved the game. You won’t have to go all the way to the beginning.

It’s not cheating. Its thinking like a smart person.

The fourth game is where your character is a rookie defense attorney, who’s trying to solve his first murder. An unsuspected twist happens in the first chapter. But, I don’t feel like spoiling it for you guys. I will say that its messed up and totally unexpected.

Their are many different games to the Ace Attorney game series.  I’ll talk about them another time. There are a lot of funny scenes in this game. One of my favorites is seeing the person that gets accused break down. Each person breaks down a different way depending on the person.

When that person finally gets caught and you’re getting close to exposing their dirty secrets. Their personality starts to change. For example, one will go from looking quiet and innocent to down right bad ass. Another will look cool and collected, but then start to shake its head so fast like a freaking crazy person. When I see that I cheer in victory because I know that I won.

I’m hoping to find and play every Ace Attorney game out there. I love the game, the mystery and the characters. I think you guys will, too.