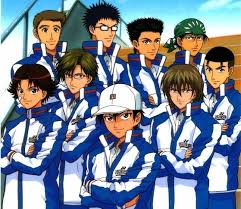 I’m not a big sports fan, but tennis is one of the many sports that are out there that I can get into and understand. So, when I saw Prince of Tennis I decided to give it a shot.

This anime was funny and cool to watch. It’s about a seventh grader named Ryoma Echizen who moves into Japan with his father. He now attends an academy where its said its tennis team is one of the best in the world and he’s determined to make the team. According to Ryoma, he plays tennis because he wants to reach the top and that he also wants to beat his father, Nanjiro Echizen, one day. His father used to be a famous tennis player, but then suddenly retired and vanished from the world. Why he did so is still a complete mystery.

Anyway, from what I can see Ryoma may look and act cool all the time, but if you really watch him you can see that he has a bit of an idiot side to him.For example, when we all thought that he had completely didn’t remember that sweet girl, Sakuno, who not only goes to the same school as him, but is always cheering him on at his matches. I felt bad for her for a moment, but as we saw later the only reason why he didn’t remember her was because he was so wrapped up in the match at the time.

It still sucks though. When the guy you idolize and have a crush on doesn’t even remember that you exist.

You should have seen the look on everyone’s face,especially, the tennis team when Ryoma beat a regular. They were very much intimidated by him and I don’t blame them. But, the only thing that I didn’t get is why they don’t let seventh graders play. I thought that was unfair, but Ryoma ends up showing them up which ends up getting him a long list of enemies that want to put him in his place.

Whether he beats them all and makes it to the top is unknown until you watch it for yourself. If you’re a sports fan then I suggest giving Prince of Tennis a shot. It’s also a manga, so you can read or watch it or both if you like. I hope you guys enjoy it!