This time I’ll be talking about another game that came out not too long ago and that is ” South Park: The Fractured but Whole” which was developed by Ubisoft. Now, I know that this is the sequel to the first game, “The Stick of Truth” so  I won’t be able to compare if they were some differences between the first and second game.

Both games are RPGs and revolve around the same set of characters, but in the second one the story continues where Stick of Truth left off. In this game, I am a new kid in town who previously was the king in the last game. But, now the medieval time game is over because Cartman discovered that a cat was missing and that his rival superhero gang the Freindship Pals have not only have looked into the matter already, but have become a lot more famous around town and knowing Cartman; he got jealous and changed the game to a superhero one. 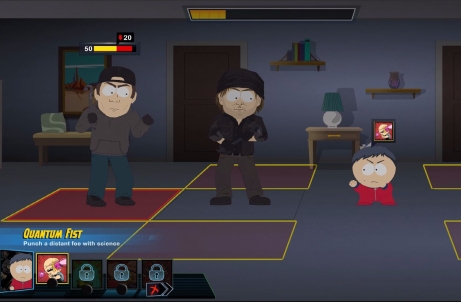 In this game it’s mostly the usual in most RPGs. You start from the beginning as a level 1 and work your way up, do side missions to get special items and do the main missions to progress the story. This game is totally funny and the stuff that happens in it is really crazy. But that’s South Park for you.

You have a good variety of classes you can choose from and you can mix and match your abilities as you progress through the story. What I think would be cool is if your abilities and moves were decided by what kind of costume you choose to wear. The combos would have been massive. The only thing that was a little annoying was the fact that you couldn’t sprint which is why I think they put fast travel points all over the map.

I think it’s really funny is that the only reason we have superpowers is because we dress up as them. It would be really funny too if the entire town was in on it so they only pretended to be hurt from my awesome attacks. The things you see and do in this game makes you laugh your pants off with the situations they get in.

This is a really good game for people who want to pass the time or beat the second game because they beat the first. This would be a good game for first time RPG players too as long as they don’t mind the cussing and slight nudity that’s found in the game. This game is really enjoyable to play and makes me wonder if they will make another anytime soon. We can only wait and hope.