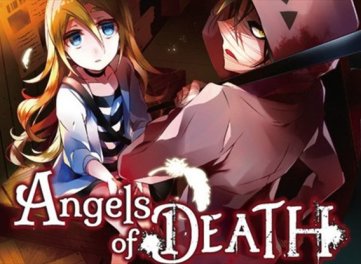 Since its October let’s talk about some horror, shall we?

The anime, Angel of Death, is still kind of ongoing, but I’ll get into that later. It’s about a girl named, “Rachel”, who finds herself in a very strange situation. All she remembers in the beginning of the story is that something happened to her parents, then she went to her first counseling session. Soon after, she wakes up in a strange building where she finds out very quickly that she has been named a ‘sacrifice’ in that strange place and that people are out to kill her for some reason.

Her first encounter with Zack wasn’t a very good one because he was the first person to try to kill her in this show with a scythe. You can tell immediately that Zack hasn’t gotten all his lightbulbs screwed back into his head yet, but he doesn’t seem to mind it. After a couple of near close calls, she makes a deal with Zack that if she successfully help him escape this building then he’ll kill her. Weird, right?

But, I think Rachel has her reasons for agreeing to this.

As you watch the show it starts to feel like your watching a video game and after doing some digging, I wasn’t really surprised to find out that it was a video game before it was turned into an anime. The video game was launched to the world in 2015 in August and was created by Makoto Sanada.

Anyway, as time goes by and they tread deeper and deeper into the insanity of the mystery building more of Zack’s and Rachel’s pasts are revealed in the process. But, there are some questions that haven’t been answered yet. Why is Rachel there? Is she dead or alive? Is she in some kind of purgatory if she is dead? What did she do to deserve being sent to that place? The anime only shows you 12 of the 16 episodes the rest of the episodes you have to search the internet for.

If anyone know where to watch all 16 episodes I would greatly appreciate it if you put it in the comments, so we can all enjoy the ending.

You can play the video game and see if you can beat it to see the plot twist of an ending or if your neither a gamer or a watcher then you can enjoy reading the manga, too. There are so many mysteries to this show and so many unique characters that these two have to go through. For the episodes that I was able to watch, I found it quite enjoyable and I hope you do, too. 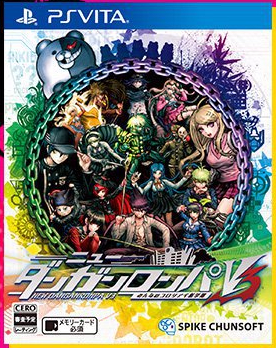 I know I’m a little late with this one and I think I say this every time, I disappear from the grid. Nonetheless, even when I’m gone and doing things in reality, I’m always thinking about you guys and what I can rant about to you all next time. Other than that I hope all of you are excited about enjoying the holidays with your friends and family like I am.

For today, I’ll be talking about the one and only Danganronpa V3 that we’ve waited so long for. I was so excited when I heard this game came out and couldn’t wait to take it home and play it. My first impression from the game was that it was going to be another killing game, Monaca is going to make her grand debut and Makoto is definitely been turned into a robot.

Oh come one, like you guys weren’t thinking the same thing as me when you saw the cover of the game. It looks like Makoto went sci-fi on us to take on whatever it is he was about to fight. That’s what I think at least.

Anyway, the game starts off with the usual ‘I don’t know where I am or why’ opener the only difference with this one is that it starts with a girl which really surprised me. Before you say, ‘but their was a girl as the main character in Despair Girls!’  I’m not going to count that game only because they weren’t the same type. Despair Girls was an adventure/shooter game while the other were mystery/graphic novel type games. If every Danganronpa game was the same type then I would have counted it, since its not I’m not going to.

Later, in the prologue it kind of blew my mind that they would make several Power Rangers like versions of Monokumas and call themselves the Monokubs. I thought it was weird and hilarious at the same time. Being weird because I thought at first that we were going to do this game with the original Monokuma.

Silly me for thinking that. 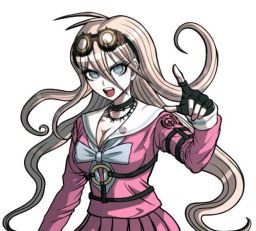 He showed up as evil as ever and his the father of the Monokubs. Some people have a theory that the mom is Monomi from the second game. Whether that’s true or not is totally up to you unless they bring out a dlc or something with the Monokubs back story. The only thing that I didn’t like about Monokuma in this game was that his voice changed a bit. I just chalked it up as a new mastermind a new Monokuma voice, but then again if you listen there are times like in Punishment Time moments where his voice goes back to the original one which for me I felt like the creators got a little lazy in that aspect. 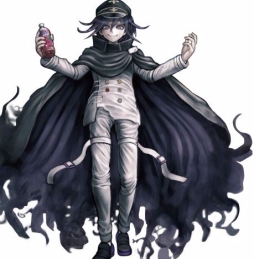 Other than that it was weird, crazy and intense as the other games before it with jaw dropping plot twists. One of the things I did like was how they didn’t care about how dirty and potty mouthed they could be which is probably why they added the Miu character. Miu turned out to be one of my favorites besides Kokichi, of course. Miu wasn’t afraid to say what was on her mind, but got totally shy when someone talked back to her in mean way which was really funny to watch. Kokichi was that wild card player that loved to stir things up anyway, he could even if that meant hurting other and being hated all the time.

Speaking of characters, this game really got me when it came to guessing their talents and finding out who the culprit to the crimes were. Usually in the previous games, it was really obvious to guess their talents and guess the culprit. In this one they made it hard as hell because their appearance didn’t match their talents except Miu and Himiko. During trials when you were on the right track on finding out the killer usually they would get really nervous and sweaty and stuff, but almost none of them did that which made it extra hard to pick the killer unless you rrrrreeeeaaaallllllyyy paid attention to the case. 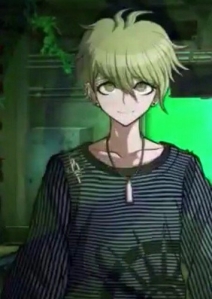 Rantaro is another thing I wanted to talk about. In the end, you never really find out what his ultimate talent is. They say in the game he was the Ultimate Survivor then later in the story you find out that its a title given to the ones who survive the previous killing games. So, what was he called before that?

If they never shed some light on that in the near future then we may never know.

Another thing I noticed was all the games that they make you play during the trials. Maybe a lot of people complained that their weren’t enough mini games in it, personally I was happy with the amount. However, with this game they added a lot more mini games which kind of annoyed me a little but only a little.

Looking back on it, it seems I have a lot to complain about with this game, but don’t get me wrong this was a wonderful nonetheless. This is just my own personal opinion about certain aspects of the game while I played it. The storyline was very powerful and dark as usual with that usual hint of mystery in it. If your into these types of games with mystery, trials, murder and mini games then you’ll want to give this game a try. Whether you’ve followed the series or not your going to be in for a wild ride! 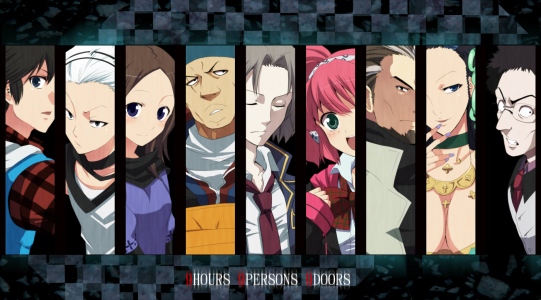 Hello! Hope you guys are enjoying this lovely morning like I am.

Recently, played this game called the “999 Nonary game” created by Chunsoft. I don’t know if I ever talked about the previous games in the series, but there are similar games to this one that came out in the past, but I’m going to just stick with talking with this for now.

This one starts out just like the previous ones where the main character which in this case is a guy names, ” Junpei”, wakes up confused and locked in a place that they’ve never seen before with eight other people. The only thing that they can remember is that they were kidnapped by a guy wearing a gas mask. The mysterious kidnapper announces to them that they are going to play the “Nonary Game” where you solve puzzles in different rooms to try to find a way out of where your being kept. 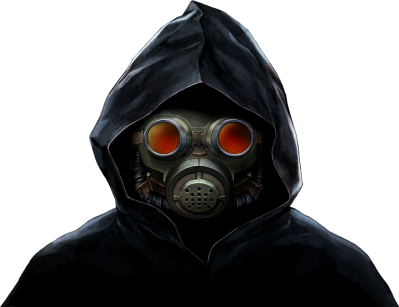 Since, it’s a nonary game where everything has to do with nine the kidnapper tells them that they only have nine hours to find their way off the ship that their on before he sinks it and they all drown. Forced to work together without knowing anything about each other, they help each other in trying to escape. As you play the game though you realize that theirs more going on when people start dying and you realize that people are keeping some important secrets from you.

The only thing that I didn’t like about this one is that there a lot of math and science stuff that goes on trying to solve some of these puzzles. If there is anything that I really despise in this world, its math! The science and science facts that they kept throwing at me I really didn’t mind but the math puzzles sucked ass.

If you’ve never played this series before then I’ll let you all know that this has several endings. All of them are bad except for one and if you want to put in the extra work to get all the endings then go ahead but for this one it requires you redo the game over and over for to get a different ending. I’m kind of the one time gamer when it comes to things like this. But, you guys can go right ahead if you want to.

If your squeamish when it comes to blood and murder then I don’t recommend this but if your into it and solving the mysteries and solving puzzles then you’ll have a hell of time with this one. I really enjoyed the story and the different characters and how everything gets revealed in the end. The endings are always mind-blowing, I love it except the math. I hated the math parts but I still hope you guys enjoy the game.