Hello everyone! Its been a while since I lasted posted anything, but right now I’m about to talk the anime Riddle Story of Devil or also known as Akuma no riddle. This anime was really fun to watch and it was hilarious all the way through. It’s about a group teenage girl assassins who get called in from all over the world to participate in Class Black.

Class Black is an event where assassins are selected go to a regular high school and pretend to be students while also trying to eliminate the target before the rest of her classmates. Whoever kills the target first will have any one wish granted. The person who we revolve around is Tokaku Azuma, who is a low-key badass my book. She comes from a long line of assassins that make her feared among her classmates and she’s as cold as ice.

The second main character and the unfortunate target in this year’s Class Black is Haru, a cheery and naive girl that wants to be friends with everyone. She was so freaking naive that sometimes that I just wanted to punch her in the face because no matter how bad things got and no matter how hard everyone was trying to kill her, she kept trying to be friends with them as if that was going to change their minds or something. I kept looking at the screen sometimes like,” Can someone slap her, please?”

In the beginning, Tokaku became so intrigued with Haru that, even though, she was sent there to kill her like everyone else, she decided that she was going to protect her instead. I loved every character in this show even the oblivious teacher that had no clue what was happening the entire time. My favorite would have to be Mahiru/Shinya Banba, they were both crazy and super weird and they both made me laugh every time they showed up. Also, I was very shocked at her weapon of choice which was a freaking sledge hammer! I was scared for Haru when she decided to try killing her it was like watching a horror movie with the crazy psycho. 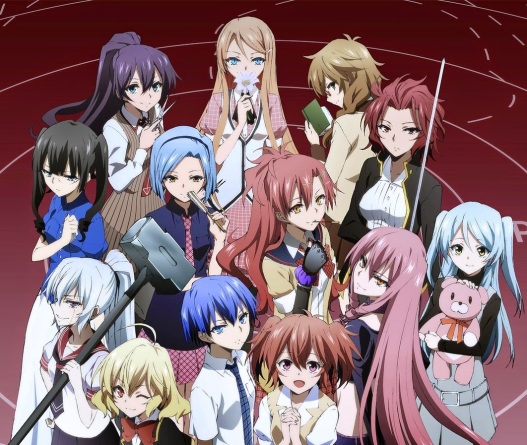 This is a great anime and if you love hot girls (no matter how crazy and dangerous they are), action, mystery and friendship then all of you will definitely love this show and the manga, too.

This older cartoon called “Martin Mystery”  which revolves around three people who work for “The Center.” The Center is a secret organization that investigates paranormal activities all around the world. The three agents that they send are Martin, Diana and Java.

Martin is a normal teenage boy who loves to flirt with pretty girls but mostly ends up making himself look like a fool in front of them. Also, he seems to be the main character and leader of the group much to Diana’s dismay. Diana is Martin’s step-sister who is smart and seems to be the common sense in the group and loves telling Martin how stupid he could be sometimes.

In the beginning of the show it doesn’t really make it clear that what their relationship was. Almost, immediately, I felt a love connection between the two so I thought at first that they could be two people who haven’t yet become a couple. So, I was really surprised to find out that they were actually siblings. Turns out though that in the comic they were lovers but decided to change it so they would end up siblings instead.

Anyway, the team’s last member is Java, the cave man. I don’t just say that he’s a cave man just because he looks like one, its because he actually is one. They found his body in an iceberg and made him an addition to the group. Now he serves as Martin and Diana’s friend and the team’s muscle.

When ‘The Center’ calls them for an assignment, Martin uses his high tech watch to find a portal in the school that takes them to The Center. Sometimes, the portals end up in the most ridiculous of places and I kind of wonder how no one hasn’t gotten suspicious.

As I watched the show, I thought that Men in Black had a lot of influence in it. Aliens and other creatures worked in the organization, they got cool gadgets and no one knew what they did. This show is filled with aliens, ghosts, zombies and other paranormal beings that you can think of and also filled with romance, comedy and friendship. It is really enjoyable to watch.

Space Dandy season 2 is a the continuation of what Dandy and his crew was doing in the first season. Just to give you all a recap of what the show is about, it’s about a team of alien hunters that go all across the universe trying to catch rare aliens for money. Unfortunately, for them they never really catch anything. They’ve had some close calls before but still haven’t caught anything.

Their hunting skills have gotten so bad that Scarlet, who is an inspector who works for the registration center actually suggests to Dandy and his team that they should just think about a career change. Which hurt their pride immensely, but its like they do anything they anything. Meow, the cat alien just eats, sleep and play video games or go on social networks. The robot, QT, just follows the crew around and keeps telling the rest of them how useless they are and Space Dandy, the leader of the team, is the one who causes most of the trouble and sometimes gets them out of it, too.

Oh and I forgot to mention that Gogol Empire is still after Dandy because they believe that he holds the secret to them winning the war against the other empire. They are still trying to capture them with no luck on their part either. For some reason, they think that Dandy is some kind of genius that keeps trying to avoid them at every turn. But, Dandy isn’t even aware that their trying to capture him in the first place!

I wonder when their going to ever capture Dandy and see  what happens next.

My favorite episodes so far are There’s Music in the Darkness, Baby and I Can’t be the Only One, Baby. In the episode, There’s Music in the Darkness, Baby, Dandy disband his team and then gets a letter of invitation from a rare and creepy alien who he thinks when he gets a letter is a pretty girl alien. Turns out he invited him so he could freeze him and steal his smile.

In the other episode, I Can’t be the Only One, Baby was very funny in my opinion. Space Dandy and his crew end up going to parallel universes where they kept meeting different versions of themselves. Personally, my favorite parallel universe Dandys’ were the first one with the blue hair and one who kept doing Michael Jackson moves. Why he kept doing that was beyond me?

How this hilarious season is going to end is beyond me. Will the Gogol Empire finally  capture Dandy? Will they ever get good at alien hunting? Will Dandy ever get a girlfriend? Will Dandy ever be able to buy the franchise called BooBies? Who knows, but I’m excited to find out.